layout: post current: post cover: assets/images/posts/git.png title: Basic GIT tutorials for Windows (Beginners) date: 2017-05-14 12:00:00 +0545 navigation: True categories: tech tags: tech class: post-template subclass: ‘post’ author: cdrrazan permalink: /blog/basic-git-tutorials-for-beginners/ summary: — Version control is a system that records changes to a file or set of files over time so that you can recall specific versions later. So there are a lot of tools that actually help in VC but in this topic we will be covering with the basic topic to use, configure git and use github. —

Before learning GIT we need to know what VC actually is. Version control is a system that records changes to a file or set of files over time so that you can recall specific versions later. (Source: http://git-scm.com) So there are a lot of tools that actually help in VC but in this topic we will be covering with the basic topic to use, configure git and use github.

Specifically, i’m covering this topic in windows using windows 7. I assume you already have installed git for your system. Don’t worry even though you haven’t, head over git-downloads and choose the OS you are running and install. It should go easy as there is nothing to mess about.

Both GIT GUI and GIT BASH are installed in case of the windows. Fire up the GIT BASH. You will be prompted with the black terminal like screen. Most of the linux commands work here but in case of the windows user you need to know the basic make new directory, file etc which are pretty simple. So, before beginning, make sure git is clearly installed and you know basic commands of the terminal as said above.

1. GIT version can be checked by git –version. The manual page on git can be referred to man git but it wont work on windows.

If you do this in Linux, you will get the following result. 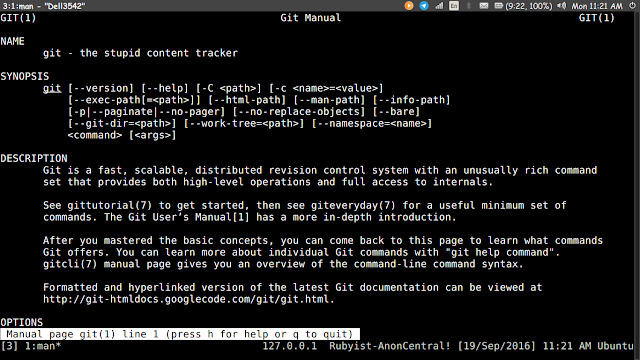 3. Now we are going to make an empty directory and push the file to the remote i.e in our github account.

In order to do the git operation, git needs to know who we are.

Configure git by the following commands

Then proceed to the following operation.

Now we can add anything file folder anything in the repo (locally still it is).

Exp: What this does is it writes the hello from git Blog by RAZan to the index.html

//for adding all files to the staging area. If you want to add only those file that were modified then you can do by this git add <filename>

//now the file in the staging are committed with the message. mostly these type of message is included to show the user what things were modified.

Once the repo is created grab the HTTPs link from there.(SSH concept is little bit advanced)Now we know where to push our REPO. So go through the BASH and type

After then PUSH the REPO by using

You can check the git status after every command you enter.

Feel free to query me. You can meet me here in Twitter or visit my Repos at Github. Thank You. We will meet in the next blog post.